The Legend of King Držislav: Why the Chessboard is on Croatia's Coat of Arms

Croatian checkerboard is one of the oldest and most popular national symbols in the whole of Europe. It traveled a long way, allegedly from the 10th century, appearing on numerous Croatian national symbols. Today we see it covering the main shield of the Croatian coat of arms.

There’s a big controversy about the origins of the chessboard on Croatian national symbols of different time periods. Some suggest that Croatians brought the chessboard from Iran, while other citations focus more on the colors rather than the board itself saying that white indicates White Croatia, and red indicates Red Croatia. Among all these stories and legends, however, there’s a particularly thrilling one, the legend of King Stephen Držislav, who saved his life and gained rule over some historical territories thanks to being a skillful chess player. 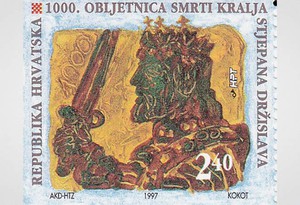 Once upon a time, Stephen Držislav, a medieval Croatian king of the 10th century, was fighting the Venetians over the lands of Dalmatia, a coastal region in Croatia. During one of the battles, King Držislav got captured by the enemies, who put him in prison in Venice.

The Venetian leader, who knew that the king loved playing chess, decided to offer him a deal: they would play a 3-game chess match, and if King Držislav managed to win the match he’ll be set free. The Croatian King accepted the challenge and won all three games against the Venetian doge to gain his freedom back and, according to some versions of the legend, even the rule over Dalmatia and all the Croatian cities along the Adriatic coast. When King Držislav returned to Croatia he decided to make the chessboard his coat of arms as a memento of his victory.

Even though this legend was created and popularized in the 19th century and cannot be considered historical truth, there's no doubt that the chessboard has been one of the major symbols of the Croatian nation. The first evidence of the chessboard was found at the end of the 15th century. Here are a few examples of Croatian national symbols with chessboard:

Today Croatia is the 19th highest rated chess country by the average rating of its top 10 players - 2577.