Chessify introduced its subscription model at the end of 2021 based on the request of our users who wanted to have unlimited cloud analysis for a fixed price. Preserving this purpose, we’ve made a few changes to our subscriptions to give our users a wider choice. Let’s go through the main changes point by point.

The point of the Free plan is ​​to provide chess amateurs with a personal analysis platform without making them install any chess programs or engines. All they need to do is to create a free account on chessify.me/analysis and analyze their games and positions directly on the web. The free plan gives our users access to all the features of our dashboard and notation, plus free analysis at 1,000 kN/s speed with Stockfish, SugaR, and asmFish engines.

The Amateur plan is the perfect choice for those players who want trustworthy chess analysis for their online games and opening preparation. The server speed for the Amateur plan is 10,000 kN/s which means that on average, the engines (Stockfish, SugaR, and asmFish) will analyze 10,000,000 nodes in one second. 10,000 kN/s speed is what a higher-end laptop would be able to support.

A major difference is that Chessify runs Stockish on Oracle’s cloud servers and, therefore, does not use the resources of the player’s device. Moreover, the cloud servers allow players to access their engine analysis from any device, even on mobile.

The up to 100,000 kN/s speed servers are available for Master and GM plans and are used for running Stockfish (NNUE and traditional 14.1), asmFish, and SugaR engines. The unlimited servers will now allow no more than 4 users simultaneously, which means that their speed will rarely drop below 25,000 kN/s.

It is important to understand that the speed of Stockfish (and other engines too) heavily depends on the position it is analyzing. In chess opening positions, NPS (kN/s) is relatively lower than in endgames. Hence, while in some positions the kN/s value may drop to 22,000, in others, it may go even above 100,000 kN/s.

The monthly subscription for this server costs $34.99 only. By contrast, if an individual player rented a 33,000 kN/s server from a cloud provider, it would have cost precisely $1000 per month. Add the cost of development and tech support to the $1000 and then compare it with $35 a month. Quite a lot of savings, huh? 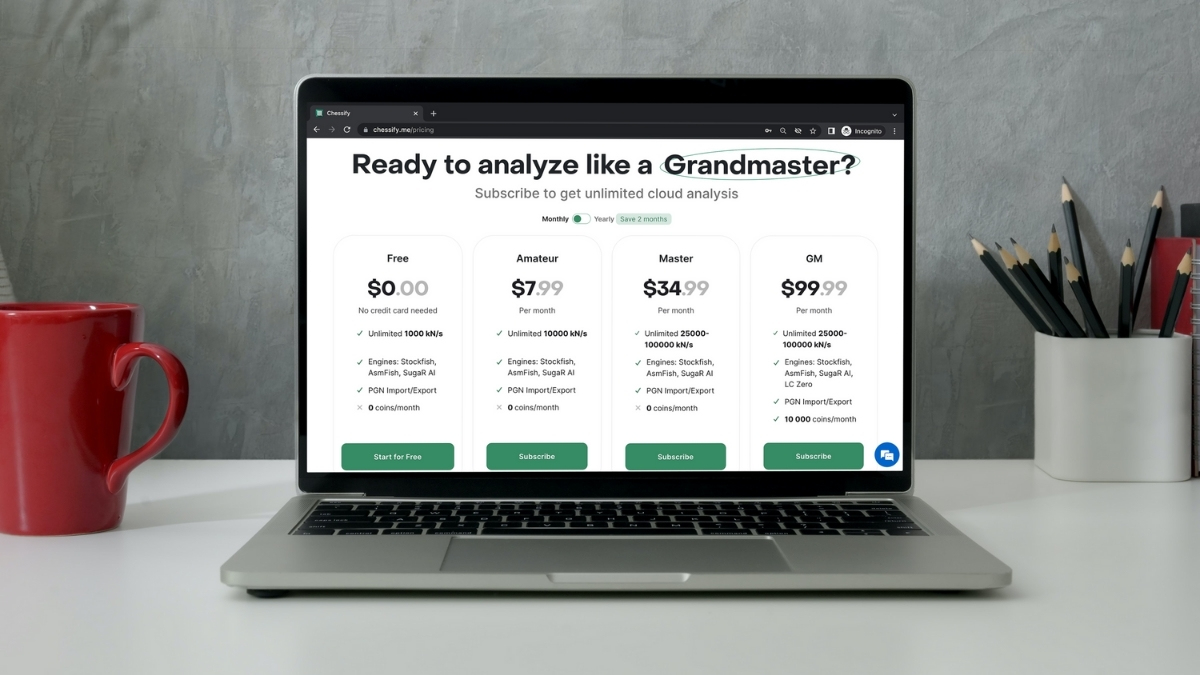 Chessify’s higher speed servers, including the 1,000,000 kN/s speed server for Stockfish, are coin-based. These servers are dedicated per user, which means that their speed is fixed since no other player can use the same server simultaneously. In order to receive coins alongside the unlimited up to 100,000 kN/s analysis, please see the GM plan. If you want coins without access to the unlimited server, then consider buying one of the options below the subscription plans on our Pricing page.