Chess Skills You Can Draw From Poker 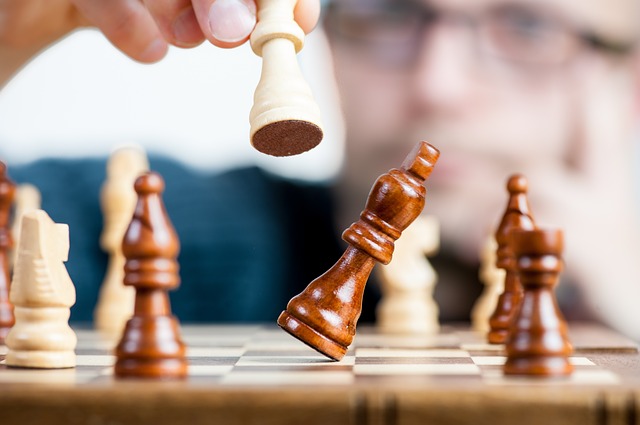 Beginning chess players have a lot of different ways to go about learning and improving at the game — from reading books to watching tutorials, to trying out some of the puzzles we highlighted in our piece "Chess Puzzles for Beginners". But in addition to all these avenues for direct education and improvement, beginning chess players with experience in other games can also sometimes draw on that experience – not for specific chess strategy, but rather for skills and tendencies that can be of use.

In this regard, poker is a prime example – a game of skill and strategy that many have experience with, and which can hone skills that are useful in any number of other disciplines. But what can the popular card game teach you that will help your chess game? Let's take a look.

Learning to rebound from defeat

In the case of poker, defeat can be particularly painful. You've demonstrated belief in your cards (or bluffing strategy), others at the table have witnessed your decisions, and you don't come out on top. In the worst of cases, you may even lose money in the process. Naturally, it can be easy as a result of all this to get discouraged, which can in turn affect the next hand you play negatively.

On the contrary, the best poker players tend to be those who learn to rise above this instinct, accept defeat in stride, and focus on doing better the next time. We see this demonstrated time and time even by the best players in the game; just recently, in fact, ReviewJournal.com recounted an incident in which Phil Hellmuth – one of the world's great poker players – lost a major "High Stakes Duel" to fellow pro Tom Dwan – only to turn around and defeat the same opponent in a $200,000 buy-in game. Of course, it doesn't always go that smoothly. But a lesser player might have taken the loss harder and wound up on a losing streak.

The fact of the matter is that skilled poker players learn to observe their own losses, learn from them, and rebound even stronger. This is a pattern we see in strong chess players as well, and not just in the pro ranks! A few years ago, essayist Tam Pham took to Medium.com to recount his mission to defeat a national master. And as he describes it, he was finally able to do so after losing to the same opponent and then studying the defeat.

Learning from your mistakes

This point relates to the previous one, in that it involves dealing with losses properly. Rather than just avoiding a spiral after a loss, however, or rebounding with motivation, it's also important for players to truly focus on what went wrong. Poker.org suggests that players need to "give themselves honest assessment," after a rough session as well as a winning one. After a loss, this means going back over the big hands in your head (or notes, if you have them) and asking if you missed an opportunity, or made a bad call. It's not always a fun process, but it can reveal tendencies that can in turn be corrected – leading to better results.

As demonstrated by the prior example with Tam Pham – as well as in the habits of almost every truly skilled chess player – the same process applies to chess. Many players will annotate or record games specifically so that they are able to go back over them, not only to identify strategies that might have worked but also to spot errors. The capacity to do this without getting frustrated or discouraged is a skill and one that's fundamental to improvement in both games.

Poker is often dismissed as a game of chance, or even stereotyped as one played by casino-goers who are more in it for the cocktails than the cards. Of course, there’s some truth to both ideas: There is a chance in poker, and plenty of people playing at casinos are just in it to have fun. But there is also serious theory – game theory to be exact – behind poker. According to a fascinating article at WSJ.com in fact, programmers are now hired to "analyze a player's game data," using advanced mathematical assessment to identify "leaks" and mistakes and calculate "what plays are optimal" in countless scenarios. That's not to say every poker player understands how to conduct this sort of analysis. However, those who are serious about their game (including most top pros) are studying theory and looking for proven mathematical ways to gain advantages.

Game theory in chess isn’t much different, although it's considered a game of perfect information, meaning that each player can know every move that has happened up until a given point in time, and can in theory know each possible "optimal" move (and therefore outcome) right through to the endgame. Actually reaching this level of foresight is virtually impossible for a human player. But chess players who have taken the time to study the math and theory behind poker will still find that the same approach can give them advantages on the chessboard. Knowing the optimal move in even some scenarios can be the difference between wins and losses.

Beyond these large focal points, there are some smaller skills that translate from one game to the other as well. For instance, poker players learn to read their opponents' emotions, deal with high-pressure situations, and focus on the smallest details of the game. These, too, are tendencies that can benefit chess players in similar ways. But it's really through the more in-depth processes and considerations discussed above that poker can actually improve your approach to chess.

Mate in 3 - Improve at Tactics with these 10 Chess Puzzles