Nothing beats the feeling of dominating your opponent right from the start. Winning a chess game in such a dominant fashion makes you feel like a grandmaster. But here's the problem - as players' level increases,  quick wins become rare and give way to longer and more complex games. Still, bringing in a bit more creativity during blitz games or against less experienced opponents is a great way to have some fun.

Whether you're looking to win at the royal game online or at your local chess club, here are six proven chess tricks that will help you grab the initiative fast and will definitely give you a competitive edge.

Winning Tips for the Attacking Side

As obvious as it may be, white has the advantage of the first move which increases its chances to initiate the attack first. We will, of course, share some tips on how to avoid getting attacked early in the game, but for now, let us start with the winning strategies for the attacking side.

Tip 1. Attack on the King Side, in Particular, the f7 Pawn

If you want to win fast, you need to checkmate fast, right? Attack on the kingside, in particular, targeting the f7 Pawn. At the beginning of the game, it is the most vulnerable square for black since only the king protects it. Start building an attack on this square to increase your chances of frustrating your opponent and abetting them to make mistakes.

The f7 Pawn can be targeted by your Queen, Bishop, and Knight. The idea is to trap your opponent's King in a mating net. Generally, you'll need your Bishop on c4, your Knight on f3 ready to jump to g5 or e5 squares, and your Queen on b3 to support the Bishop. While playing with a novice, you may even take out your Queen early and place it on the h5 square, from where it will attack both e5 and f7 Pawns. 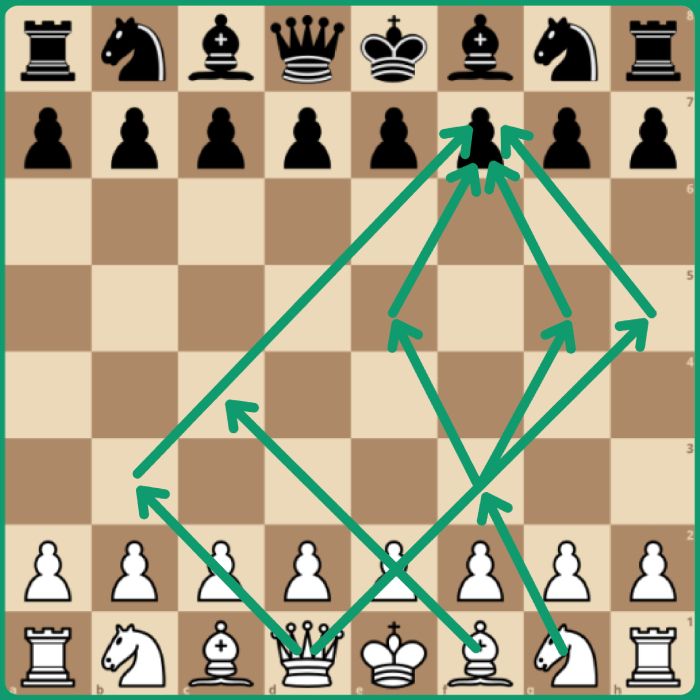 Gambits are generally a good choice against weaker opponents or those unfamiliar with chess opening strategies. While gambits won't help you gain an advantage if your opponent knows how to react, they will help you develop an aggressive attack. Without deep opening knowledge, your opponent will have to spend a lot of time and energy defending against your attacks.

What is the chess gambit? A gambit is "a chess opening in which one side sacrifices a material, usually a pawn, to gain an advantage". You can choose your gambit based on your current preferences. King's Gambit is one of the most popular gambits where you sacrifice your pawn for an opening advantage. This is an effective tactic to throw beginners off balance early and deploy vicious kingside attacks.

The opening starts by moving the kingside bishop pawn up two spaces after the initial 1. e4 e5 moves. Although the most popular and solid response from black is to accept the sacrifice, most beginner players will then crumble easily after you start developing your kingside pieces and simultaneously attacking the black King. 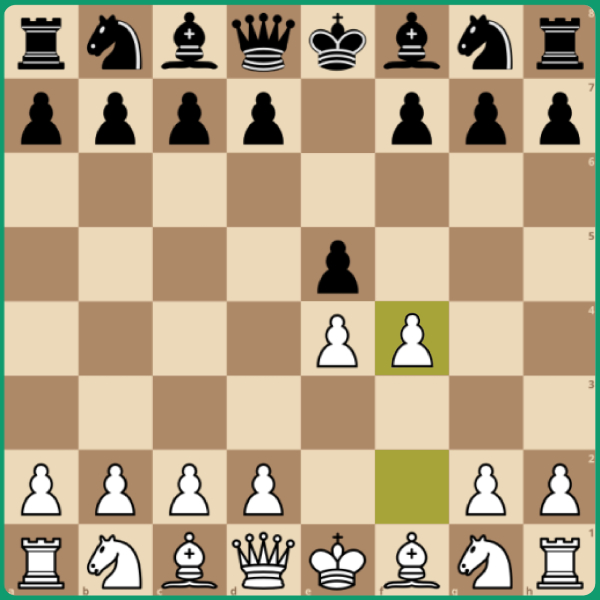 The above sequence is the basic premise of the King's Gambit. After f4, your opponent will often choose to take the Pawn at f4 (exf4).

While looking for the best outcome, consider performing a thorough self-analysis by checking your opening moves and possible mistakes via the References available in Chessify.me. With a wide selection of games recorded since 1475, the library contains opening moves preferred by most players.

Tip 3. Develop Your Pieces Toward the Center

This is an essencial tip for chess beginners overall, but it is especially important if you’re looking to win your games fast. You should develop your pieces toward the center, where they can be more active and influential. Just think about it. Once you occupy the center, it's easier to launch an attack from there and create a mating net around your opponent's King. Pieces that control the central part have more space to move around, thus making it easier to create winning combinations.

Many beginner players ignore this simple yet crucial idea of center control. They develop their Knights to a3 or h3 squares, restricting their ability to join the game later and making them susceptible to bishop attacks. So aim for the central squares with your knight, moving them to f3, c3, and d2 instead. 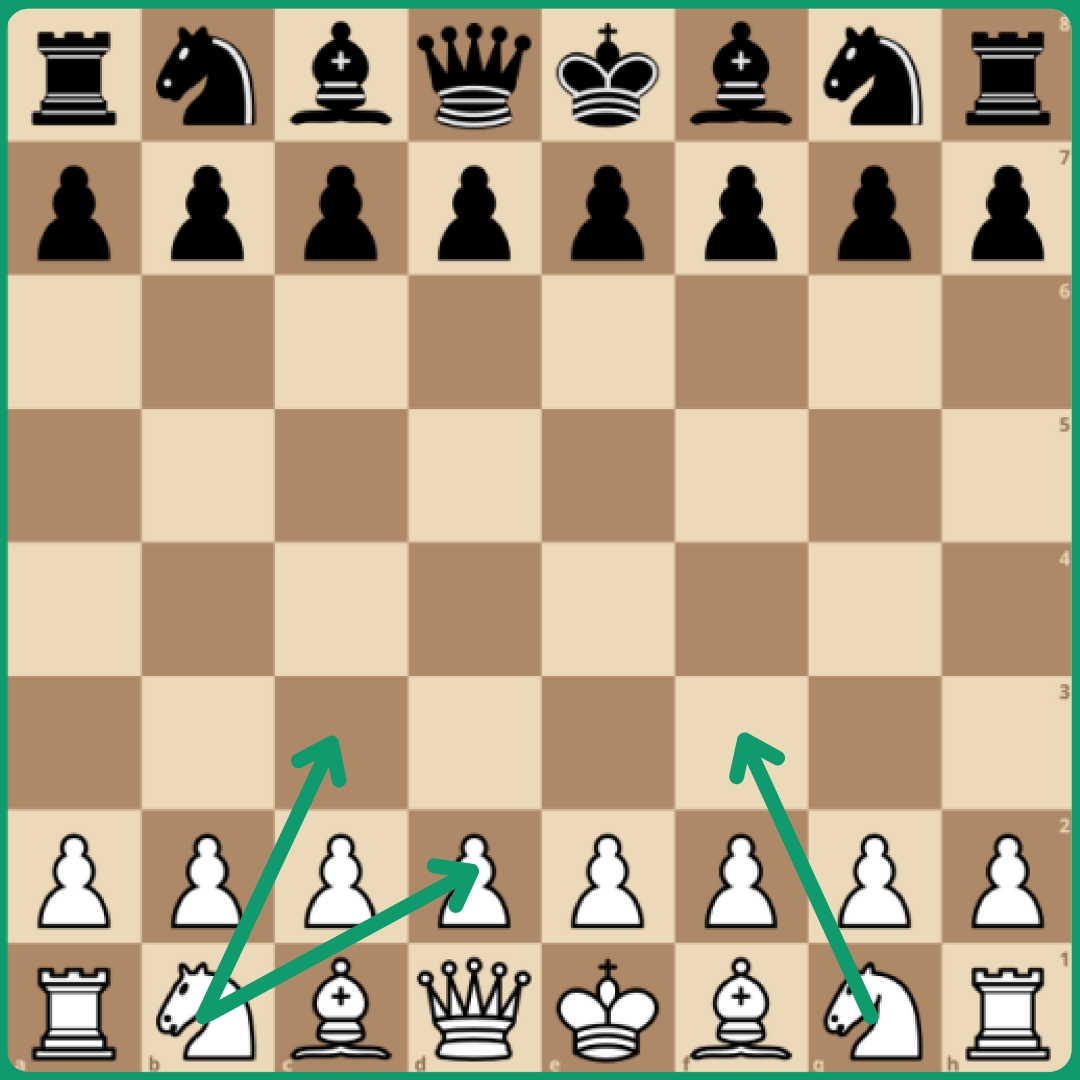 The same goes for bishops. Some players like to develop their bishops through fianchettos, which involves moving and positioning the Bishop on the second rank of a Knight file. Although many popular openings include fianchettos, they often result in slower strategic play rather than dynamic game-play.

Thus, if you plan to checkmate your opponent early, consider occupying the central squares while developing your minor pieces.

A closed structure refers to a position with a locked Pawn center where typically very few (if any) Pawns have been traded. This makes it difficult to maneuver your pieces around and build attacks. So try to keep the center open by forcing your opponent to exchange the pawns.  If you’re playing with white, then sacrificing a pawn may also be very helpful in keeping the game open and dynamic. King’s gambit is a good example of sacrifing a pawn for an open centre and quick attack.

Once you succeed in keeping the center open, start thinking about opening files and diagonals. For instance, the e and f files are excellent opportunities to bring your Rooks into the battle. Yet, consider simultaneously putting both your Bishop and Queen on alert along the a2-g8 diagonal (or a7-g1 if you're playing with Black) to target your opponent's King.

These are winning tips for mostly White, as it is the side that has the initiative and higher chances for an attack. Yet if by any chance you play with Black, i.e., appear on the defending side, you should consider different strategies to keep the attacking side at bay. Let's quickly skim through a few.

Tips for the Defensive Side

Defense in chess is all about being one step ahead in terms of anticipating your opponent’s actions. Pay attention to how your opponent moves and try to use their mistakes against them. If you want to defend well, you should move your pieces proactively, aiming to counter-attack rather than simply defend.

Tip 5. Don't Allow Your Pieces to Be Attacked by the Opponent's Pawns

As a rule of thumb, you don't want to move the same piece for several times in the opening. When the game has just started, your goal is to develop your pieces as soon as possible. If the pieces you've already developed are constantly attacked, you'll have to retreat them instead of developing a new piece. 1…Nf6, for example, is a typical response to 1.e4 by amateurs, but it requires deep opening understanding to avoid losing early. White can move its pawn to e5 and then continue attacking your knight on d5. The same goes for 1.d4 Nc6. So we don’t recommend beginners start the game this way. Instead try to protect the squares at which your pieces can be attacked by pawns.

When you notice the centre is opening, it is time to castle. Castling happens in almost every serious chess game. It is a defensive measure in chess where the King and Rook move to opposite sides of the board.

Castling is meant to get your king out of the center and keep it safe throughout the game. You can castle the following way:

- The King moves two squares toward the Rook

- The latter moves to the square on the King's other side

Such a move serves two purposes: it protects the King and joins the rooks allowing your pieces to coordinate better.

Analyze your games. Contemplating the game you just played is the key to self-improvement and learning from mistakes. Take some time to review your game and identify the tactics you used that worked and those that didn't.

Professional chess players invest in advanced hardware and software solutions to analyze their games. This allows them to go over each move they made and examine the consequences of those moves in hindsight.

Amateur players can also benefit from innovative chess engines but with little to no investment. A chess training platform like Chessify.me benefits Grandmasters and amateurs alike equally. With all the market-leading engines collected in a single place, these tools allow players to analyze the game, spot mistakes, and make better decisions in their future games.

Chosen by the chess world's leading representatives like GM Levon Aronian, GM Anish Giri, and others, Chessify.me allows players to explore various setups. At up to 1,000,000 kN/s speed with Stockfish and other engines, players can quickly find out the solutions to their games.

Take it to the next level!

After all, practicing and learning from mistakes is the only way to improve your chess game. Chess puzzles for beginners can be used to practice tactics, while more complex puzzles can help you improve your decision-making skills and strategy.

Renting analytical servers on Chessify.me Cloud Pro allows players to dive deeper into the strategic game nuances. The process is very simple but it boosts your performance substantially. Here's a quick glimpse of Chessify.me in action:

- Chessify’s analysis board allows you to quickly scan moves and evaluate them with the help of chess engines. You can also look at variations and compare them with yours.

- You can also analyze the endgame and easily spot any missed opportunities, so you don't repeat the same mistake.